Skip to main content
WINE TASTINGS ARE BACK - WE ARE HIRING! - LARGEST SELECTION OF BEER & WINE IN AVL - EMAIL ORDERS - CALL AHEAD ORDERS
Instagram
Follow us
This error message is only visible to WordPress admins 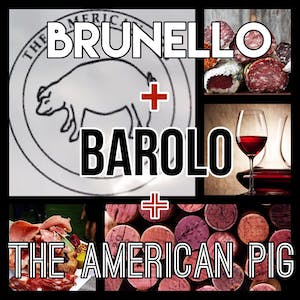 One of the best Wine Tastings in Asheville, this holiday season. Join us this Friday as we open two of Italy’s greatest wines- Brunello di Montalcino and Barolo then pair them with some Appalachian Charcuterie and grilled sausage from our friends at The American Pig. One of the greatest tastings of the year! Just in time for the holidays…. Wines, Salami and Sausages available for sale

Gianni Brunelli, a man of many interests, established
“Osteria Le Logge” in Siena (which has become one of
the top restaurants of the city). In 1987 he returned to
Montalcino and purchased Le Chiuse di Sotto, an
estate that had belonged to his father Dino, with two
hectares of vineyards standing at 200 meters above
sea level in the northern part of the area. He replanted
most of the vines in 1989 but still has a small plot of
older holdings dating back to his father’s original 1947
plantings. A few years ago he expanded with the
purchase of the “Podernovone” vineyard, located
further south in Montalcino. Like Paecnti, his vineyard
sites allow him to blend north and south to achieve
great balance, no matter what the vintage brings. The
property has a magnificent view on Monte Amiata and
is endowed with 4.5 hectares standing at 350 meters
above sea level. The soil of Podernovone, made up of
calcareous-marl and schist, reflects light and heat,
leading to a warmer site. Le Chiuse di Sotto is cool
and airy, bringing bright acidity to the blend. After
Gianni passed away in 2008, his wife Laura, who was
already working at the estate, took the reins. Paolo
Vagaggini, one of the most sought after enologists in
Tuscany makes the wine.

A top notch small producer, making beautifully elegant wines
in Montalcino: Podere Brizio. This 9 hectare estate is located
in Sant’Angelo in Colle, an area of Montalcino known for
producing long-lived wines of great elegance and finesse.
Once a part of the larger Pieve di Santa Restituta estate, when
proprietor Roberto Bellini sold Pieve to Angelo Gaja in 1996,
he held onto the tiny Podere Brizio parcel because he felt its
quality far exceeded the other holdings that now make up
Gaja’s Montalcino adventure. We were thrilled to discover the
estate’s cache of older vintages, and even more excited when
we saw the incredible prices at which we can offer them to
you! The silver coin on the labels of the wine is known as the
“Parpagliola.” Minted in 1556, it shows the she-wolf of Siena
with the writing “The Republic of Siena in Monte Ilicino.” The
name of the city we now know as Montalcino derives from the
Italian for Mountains of the Ilex (or Holly tree).

Their history starts in the mid 1940’s when Albino
Rocca’s father Giacomo started in the wine business
initially selling grapes from family vineyards and later
making his own wine that was sold in demijohn.
Thanks to the inheritance of some of their most
precious vineyards in the 1960’s their grandfather
was able to start what is now their winery Albino
Rocca. Albino’s hard work allowed Angelo Rocca to
lay the foundation that created a family winemaking
tradition that has grown internationally over the
years. Their history has been built together, year by
year. Following the untimely death of Angelo Rocca
last fall in the crash of his private plane, this top
Barbaresco estate is now being run by his three
daughters, Daniela, Monica and Paola. Enologist
Beppe Caviola, who consulted for Rocca for a
decade, continues to make the wine here. The estate
was just picking its moscato in mid-September when
I stopped by to taste with Daniela, who gave up a
career in banking to return to the family estate a few
years ago. The Roccas are clearly enamored of the
2011 vintage in Barbaresco, as they made their first
riserva since 2006, which Daniela described as “a
measure of the vintage’s quality and aging potential.”
As with a number of other producers I visited in
September, Rocca is making greater use of large oak
casks made in Austria by Stockinger, in fact, as of
2010, their Barbaresco Ronchi is raised entirely in
larger barrels. – Antonio Galloni

Enzo and Carlo Revello take over their father’s estate in 1990:
their vineyards, once belonging to the local parish, boast
parcels in the crus of Giachini, Rocche dell’Annunziata,
Conca dell’Annunziata and Gattera from which four single
vineyard Baroli are made. The Giachini cru, although it is
adjacent to the Rocche vineyard, yields wines with a very
different character. Rocche dell’Annunziata is undoubtedly the
most important cru together with Brunate in La Morra. Conca
is a cru in the lower part of the Annunziata district of La
Morra, yielding wines that are slightly austere and more
similar to the wines of Serralunga and of Castiglione Falletto.
The beautiful cru of Gattera, dominated by a cedar of
Lebanon that was planted at the end of 1800s, was chosen
by the brothers as the wines made from these vineyards, due
to the soil, altitude and exposure, are suitable to be aged in
large oak. In fact the Revello’s Barolo Gattera rests for 24
months in 15 hectolitre Slavonian oak casks. The cellar is
modern and equipped with rotary fermentors and vats with
temperature control: fermentation and maceration with the
skins is short, approximately four days for the Baroli. The
wines rest in French oak barriques, except for Barolo Gattera
as mentioned before. Viticulture here is sustainable, only
sulphur and copper base products, no insecticides (sexual
confusion is used against the grape-fruit moth). Grass is left
between the rows of vines and every other year it is mowed in
autumn and worked into the soil as green manure. The estate
does not only have wines to offer: if you are travelling in the
area, you can stay at the delightful “Agriturismo”.

Back to all events